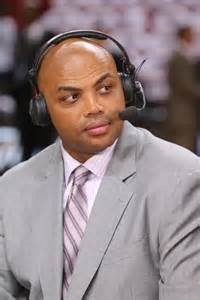 “There’s no excuse for giving more attention to sports than school work. Young athletes starting at the earliest stage of their athletic development need to be told that if they’re smart enough to play football, basketball, or any other sport, then they’re smart enough to understand math, science, history, anything.  And they need to be told, every day if necessary, that their chances of becoming a successful adult are helped more by an education than by a jump shot.” – Charles Barkley

He was one of the most intimidating players in professional Basketball. His name alone struck fear in the hearts of players, coaches, and sometimes even fans. Both on and off the court, Charles, as he is affectionately called, is outgoing and passionate about the game he played, practiced for long hours, and above all loved.

During his eight seasons with the Philadelphia 76ers, Charles was named to the All-NBA Team every year from 1988 – 1992, and in 1991 was chosen Most Valuable Player at the All-Star Game.  In 1986 and 1987 he made the second All-NBA Team.  In his first season, 1985, he was chosen for the NBA All-Rookie Team.  And he led the NBA in rebounding in 1987.  In June 1992 Charles was traded to the Phoenix Suns, and stayed with the team until 1996 when he was traded to the Houston Rockets.  Charles retired in 2000. Currently, Charles works for TNT as games play analyst. 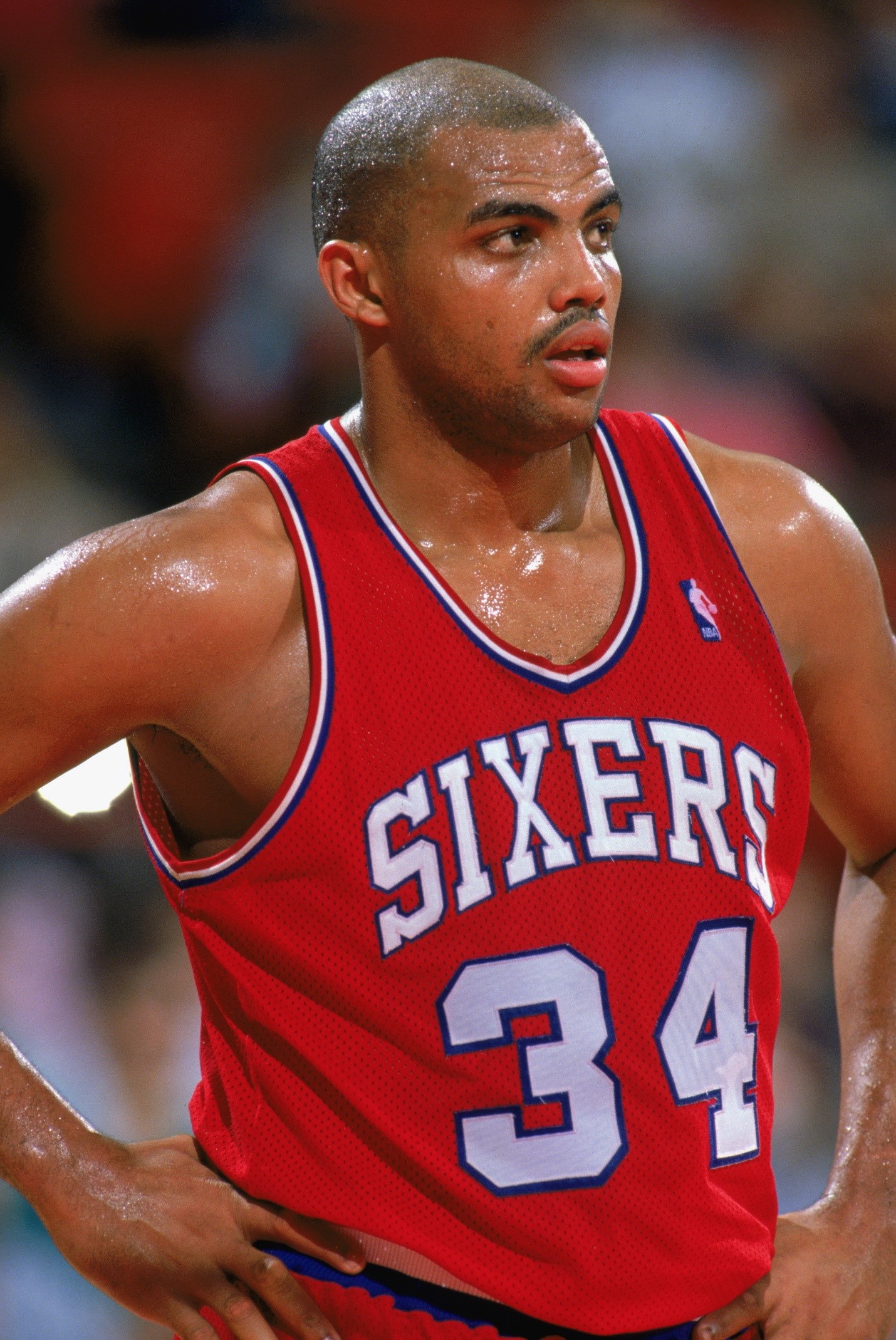 With his shaved head and bulky frame, Charles Barkley definitely stands out in a crowd. During a game, he stood out by pulling down rebounds upon rebounds and jumping above his opponents to deliver monstrous slam dunks.  While he looked menacing on the court, and was one of the fiercest competitors in professional basketball, in person Charles is soft-spoken, funny, and witty.  After a question is asked, he pauses, then takes time to answer as completely as possible.  If there’s one goal he strives for in his personal and professional career, it’s his goal to be true to himself. 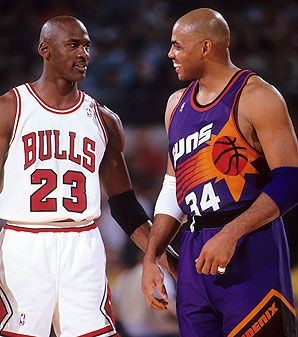 Charles grew up in Leeds, Alabama, a small-town outside of Birmingham.  He was raised by his mother, Charcey Mae Gleen, and his grandmother, Johnnie Mae Edwards.  “They were my biggest inspiration,” Charles says.  As a child, he never looked up to professional athletes as role models.  Now, he admires all professional athletes because he knows the hard work it takes to get there.  He still doesn’t think they are the best role models for young people.

Charles wasn’t a star athlete in high school where he played basketball and ran track.  He didn’t even make the varsity basketball team until his junior year.  At 5’ 7”, Charles was told he was too short to play basketball.  He became determined after playing junior varsity, his sophomore and freshman years to finally make the varsity team.  Charles would spend hours jumping rope trying to build up his legs and stamina.  When he decided that might not be enough to strengthen his legs, he began jumping the three-and-half foot fence around his house; and that did the trick.  The next year he made the team, and to this day Charles is known for his incredible jumping ability.

After high school, Charles went to Auburn University where he grew into his present height of 6’ 6” and developed into an all-star athlete.  In college, he would also develop as a person. “It (college) gives you an opportunity to grow,” he says.  “You get away from your parents, and you get the chance to meet new people. In high school, everybody knows everybody.  Once you go to college, you meet all new people from different parts of the country, and indeed the world.”

Charles was like any college freshman when he arrived at Auburn.  He found out that all his school accomplishments didn’t mean much anymore.  Again, he was told he was too short and weighed too much to be a star college player.  At Auburn, Charles would have to make a name for him-self all over again – which he did.

At Auburn, the number one sport was football.  The basketball team didn’t get the same attention.  Charles wanted to change that.  During his three years at Auburn, Charles helped turn the basketball program around.  His aggressive play and out-going personality got other students attention.  He was nicknamed the Round Mound of Rebound. Since football was the most popular sport, the star football players were the most popular guys on campus.  One of the players Charles became friends with also played on the basketball team.  Charles and Bo Jackson have been friends ever since.

Charles admits he never spent an equal amount of time on school work as he did with basketball.  He says if there was one thing he could change about his school years it would be his attitude towards academics.  Throughout high school and college his first love was basketball.  Charles sometimes got bored with classes, but now sees the importance of getting an education, particularly a college education.  “That’s where you get your most important foundation, your base,” he says.  “It’s very important, very significant.  What you do when you’re young, dictates your future. In his book “Outrageous!”  Charles says that he believes it’s harder for kids who are talented athletically to concentrate on school.  But, he adds, “There’s no excuse for giving more attention to sports than school work.  Young athletes starting at the earliest stage of their athletic development need to be told that if they’re smart enough to play football, basketball, or any other sport, then they’re smart enough to understand math, science, history, anything,” Charles claims.  “And they need to be told, every day if necessary, that their chances of becoming a successful adult are helped more by an education than by a jump shot.”

After his junior year at Auburn, Charles was chosen by the Philadelphia 76ers in the first round of the NBA draft.  He was the fifth player chosen overall.  Charles was to start his professional career with the 76ers.

At the time superstars Julius “Dr. J” Erving and Moses Malone led the team and Charles learned a lot about the game from them.  As he began his career, many in the media predicted his height would be a disadvantage. Being a 6’ 6” in a league with many players over 6’ 7” has never been a problem for Charles.  All it has meant is that he has had to work harder to develop his strength and his jumping ability.

It didn’t take him long to become popular with Philadelphia fans.  Every night people would come to watch Dr. J glide down the court and Moses Malone battle under the basket, and couldn’t help but notice Charles hustling to grab rebounds and making spectacular dunks.  With each game, his confidence grew, and that began to show on the court as well.  Teammates, opposing players, fans, and the media felt the presence of this future member of basketball’s elite.  Soon, Philadelphia has found their new star – Sir Charles!

Off the court, he spent time relaxing with his wife, Maureen, and their daughter Christiana.  The sport he enjoys watching the most is boxing, and when he’s not playing basketball, you can catch him on the greens hitting a golf ball.  But, his favorite activity is being at home with his family.  Aside from Charles’ talent, popularity, and fame, he considers himself a person first and an athlete second.

What stands out most about Charles is how reserved he is in person.  In talking with him, you get the feeling you’re not getting a well-rehearsed answer to every question you ask.  When Charles speaks, he says what’s on his mind.  It doesn’t always come out nice to some people, but it’s always what he believes to be true.  While some have criticized him for speaking his mind, no one could ever fault Charles for expecting in others what he gives of himself – the best. “Sometimes Charles will say things everyone else might want to say, but won’t have the courage and guts to say it,” said his friend Michael Jordan.

In 1988, Charles told reporters he believed all NBA players should be tested for drugs.  He speaks out against basketball becoming too much of a business, that players are being treated more like property than as human beings.  Charles is in favor of the controversial Proposition 48, which states that athletes need to score at least 700 on the SAT or 18 on the ACT tests and have a grade point of 2.0, a C average or better to play college sports.  Many say that rule discriminates against minority players.  Charles believes it is a fair rule and that athletes shouldn’t be treated any differently in the classroom than non-athletes.  He has also said he believes athletes are overpaid, and criticizes the media for glamorizing the lifestyles of sports heroes.  He stresses the fact that most young athletes will not become professionals.

“Everybody wants to be a pro athlete,” said Charles, “but, it’s kind of an unrealistic goal.  So much is going to happen while you’re in high school, while you’re in college.  Everybody they expected in my college team to be in the pros didn’t make it.  I was the only one.  I’m not trying to discourage anyone.  I’m just being candid.  You could be a lawyer, a doctor, a banker, a business executive, an accountant, an architect, an entrepreneur and become very rich.” 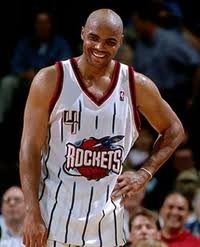 Wherever Charles Barkley played basketball, in Philadelphia, Phoenix, Houston, Barcelona, and whether he was playing in the NBA or the Olympic Games or analyzing game plays for his current employer, TNT, Charles will always be outspoken, blunt and competitive.  “You can’t be what other people want you to be,” he said.  “You’ve got to do what’s best for your-self; you can never lose who you are and what you are.”

GTW: How was your experience at the Olympics?

BARKLEY: It was an unforgettable experience.  It was nice to be among the best athletes of the world.  It was equally nice to meet people from all parts of the world with everyone wearing a broad genuine smile.

GTW: How did you like the city of Barcelona?

BARKLEY: Very lovely, except the heat.  It could get very hot.  Thanks to the breeze from the ocean.

GTW: The Dream Team made a stop-over in Rome, Italy before proceeding to Barcelona.  How did you like Rome?

BARKLEY: Rome is full of history.  It was interesting to see the coliseum and the old palace of Julius Caesar.  I like the nice boutiques of the top Italian designers. What I didn’t like was their 3-hour lunch break.  You could go home and fall asleep and not get back to work.

GTW: What sort of a creature is Charles Barkley?

BARKLEY: For one thing, Charles is not a chameleon.  I think Charles is a peacock.

GTW: Could you elaborate?

BARKLEY: I have many lovely colors.