Who do you think should get the most credit for a great movie (Academy Award Film)? 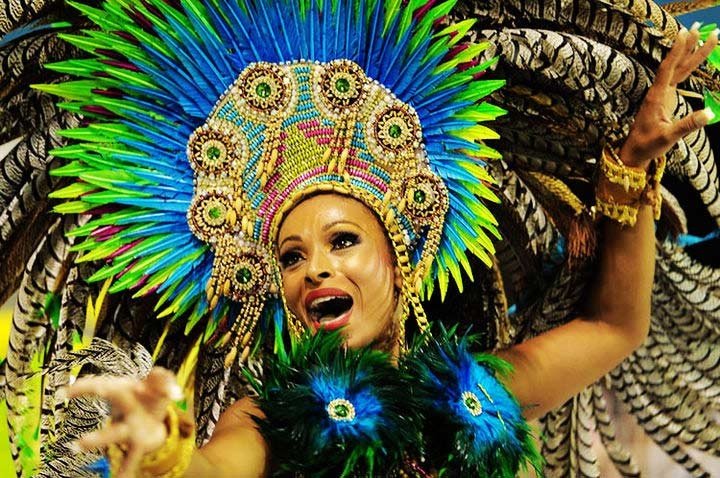 Music is powerful, beautiful, energetic, emotional, moving, expressive and magical. Many have said that music is the one true universal language. In the early 19th century, Heinrich Heine said, “When words leave off, music begins.” And the renowned philosopher, Friedrich Nietzsche, summed up his thoughts on music simply, “Without music life would be a mistake.” Perhaps the great composer, Igor Stravinsky, said it best however, when he spoke these words, “I haven’t understood a bar of music in my life, but I have felt it.” Perhaps his words would have meant even more if he had had the opportunity to see Oba Oba.

Believe me, “extravaganza” is an understatement. I must admit that I also mention these thoughts about how music is able to communicate ideas and feelings when mere words are not, in hopes that you will look past what I have written and try to listen to the wonderful sounds of Oba Oba. Or, better yet, go see and listen to Oba Oba yourself. I assure you, my words will not do it justice --- even if I sang them to you.

A music lover appreciates any style of music, from classical to country western or from rock ‘roll to soul. In fact, an exceptional piece of music touches everyone who listens, regardless of their tastes and preferences. Even the heaviest metal hard rocker will find it difficult not to be stirred by the energetic vibrations of Madonna or Michael Jackson.

I am a music lover, so I was thrilled to be at the show. I arrived a few minutes before the show started. I had a little trouble explaining to the security guards that I needed to bring in my camera, or Global Teens World readers would be extremely disappointed. Then I showed the guard my complimentary press pass, and he ushered me to my seat – first row, right in the middle of the stage. Very nice!

As I took my seat and glanced up at the stage in front of me, my first thought was, “How terribly unimpressive.” The set was extremely simple. The main stage was completely bare. In front of the main curtain to the left stood a selection of instruments from mandolins to trombones. To the right, a set of drums, bongos and a couple guitars resting on stools. The only visible set design was a series of painted panes, about two feet wide that hung from the ceiling. They were painted with a floral pattern and their only purpose, as far as I could tell, was to hide the lighting equipment. I had expected something more elaborate, and for a moment I questioned whether Oba Oba would live up to its reputation. My question was answered shortly and absolutely.

Oba Oba opens with a stirring tribute to perhaps the best known of all Brazilian musical talent – Carmen Miranda. Even if you don’t recognize the name, you would definitely recognize the woman. She is known for her considerable talents as a singer, dancer and entertainer, but she is famous for the basket of fruit that she wore on her head as a part of the act. Her fans called her the “Brazilian Bombshell.”

After a brief introduction, the room goes completely dark and a hush falls across the audience. When the spotlights flash, all you see is a beautiful, impressive looking woman dressed in a glittering gold evening dress and wearing a tall hat of tropical fruit on her head. Immediately the music rips through the silence and grabs you as if to say, “Get ready, my friend. You are in for a treat!” The tempo is rapid and sharp. The Carmen Miranda look-alike begins to dance and lip-synch as the lead singer launches into the first song. They do not waste any time building to a crescendo. Oba Oba starts out on a high note and builds from there. I am confident that Ms. Miranda would be thoroughly pleased by the tribute paid to her by these talented artists.

Brazil is a relatively large and diverse country. Like the United States, there are several different regions of Brazil, each with a unique history and culture. Oba Oba consists of eleven singing, dancing and acrobatics acts that take you on a musical tour of this exotic land called Brazil. Before each act, one of the performers would introduce the next segment with a brief description and history. It is impossible to categorize all of the music in Oba Oba, other than to say that it is all wonderful. Much of the music is upbeat, rapid and energized. It glides along like the clickety-clack of a train on the track. The songs open fast and loud and get faster and louder until the performers must either stop briefly for applause and rest – or explode.

On the other hand, some of the songs are slow, sweet and somber tunes that touch you deep in your soul. They force you to close your eyes, sway gently to the melody and dream. In fact, one of the early acts consisted of the lead female vocalist simply standing on the stage as she sang in homage to the Northeast region of Brazil. She explained that the Northeast is a “region of cruel destiny where the people sing and dance to drive away the sadness.” The songs of this region typically began soft and slow and ended high and mighty, almost as if to proclaim these people’s hope that their lives will improve and brighten as long as they persevere.

Another act pays homage to “Chorinho” better known as “The Ice Cream Man.” This act is primarily one-man show. An older gentleman struts out onto the stage wearing a milkman uniform and jamming on, what else, the ukulele. The UKELELE? Yes! Believe it or not, ukulele is a completely different instrument when you put it in the hands of a master ukelelist (Ukelelian? Ukelelier?).

And the Ice Cream Man is definitely a master and he wowed the audience with his ukulele.

One of the most impressive individuals throughout the show was the lead female vocalist. She sang the words to the Carmen Miranda tribute in the opening act and she also served as the master of ceremonies. For most of the show, she wore a bronze dress, but her voice was pure gold. She could sing quiet and low- almost a whisper, or she could belt out a loud, high note and hold it until you thought the theater would fall apart. She could sing a slow ballad, a Capella, or keep pace with the rapid beat of the bongos. In a word, she was magnificent.

The cast also included about eight young men who curiously did almost nothing during the first three quarters of the show. During various acts, they walked around the stage, or stood in the background tapping a tambourine. In fact, many of them looked quite bored and seemed to be wondering, “What am I doing here?” I wondered what they were doing there as well, until late in the show when I found out. It was act nine, called the “Rhythm Beaters” in the program. The act started with two impressive bongo solos that made your pulse rocket. I could not believe how fast they can play those drums.

After a rhythmic dance, it was time for capoeira. The young men laid down their stick and began to run, tumble, and fly across the stage doing all sorts of aerial acrobatics. It started out with a couple simple tumbling routines: back flips, hand springs; etc. As the acrobatics continued, we saw moves that you will never witness at the Olympics. These young men started flipping themselves over one another, spinning a kicking all perfectly timed so as to just miss one another by a fraction of an inch. This was not pretty, ballerina type gymnastics. This was hard, aggressive, on the edge and sometimes over the edge. Keep in mind that these young men were performing on a stage with a rock solid hard wood floor, not a padded gymnastics competition mat. As the beat of the music increased, so did the difficulty and speed of their maneuvers. The act ended with two of the men standing almost toe to toe. Then, they started doing helicopter karate kicks at each other. As one kick was flying straight at the other man’s head, he would duck down and start the turn for his next kick. They started slow, one after another and gradually picked up momentum until they were both spinning kicking as fast as they could possibly go. If even one of their kicks was off by a split second, the other performer would have been kicked across the stage. When they finally stopped, the audience exploded with cheers and applause.

The tenth act is called the “Show of Samba Dancers”. One by one, these beautiful, leggy women danced onto the stage, wearing the most stylish outfits. They performed on stage until the majority of the cast members had joined them. Then, they walked down the steps into the audience. They started pulling people out of the audience and began a long march around the entire theater. Everyone in the place was having a great time, like a big party. When they returned to the stage, the music led immediately into the “Grand Carnival”. The stage looked like Mardi Gras or the Mummer’s Parade. Six different performers strutted into the stage wearing the most outlandish costumes. They wore glittered masks and body suits with huge feathers; they looked like human peacocks. They pranced around the stage as the other performers danced and sang almost as if they were paying homage to Kings or Gods. Oba Oba came to a spectacular finish with all the performers on stage, singing, dancing and celebrating.

In short, Oba Oba is an event. The costumes are bright, colorful and sometimes exotic. The music is exhilarating no matter what type of music you usually prefer. In fact, I don’t even fully realize until after the show, that all of the lyrics had been sung in Brazilian. I had not understood one word throughout the entire show, and it didn’t matter a bit. That is why good music is the universal language, because it speaks to you, regardless of what language you normally understand.

In one respect, Oba Oba is simply a musical review of Brazilian folk songs and dances. However, in a more fundamental sense, Oba Oba is a celebration. A celebration of music and dance; a celebration of life by 70 extraordinary performers. I’m sure that everyone in the theater, the audience and the performers, enjoyed life that evening. A teenager who was sitting next to me summed up the feeling with one word - “awesome!” (Jonathan Smith was one of fifty to sixty teenagers out of nearly a thousand people at the show). It was impossible not to get caught up in the exuberance.

It is also impossible to really feel the intensity of Oba Oba without seeing and hearing it for yourself. Oba Oba is on tour now around the world. If it comes to a city near you, I strongly urge you not to miss it.

Oba Oba is an evening of fun, energy and entertainment that you will never forget.